GDS Engineering R&D developed a modern Engine Room Simulator (ERS) and it is in use by various research and training institutions. GDS ERS, called SERS, includes all engine room, ship, and environmental paramaters to demonstrate the weather effect to engine performance while onboard systems are maintaining their status with the displayed parameters. This scenario study is a predefined and set in the ERS for instructors to directly apply in their STCW Management Level Exercises. Student Workbooks accomodate this exercise with specficic forms to fill by the trainees.

Energy Management in Marine Engineering: We understand and can model your marine engineering platform for identifying the deficiences for energy management for your cost saving. 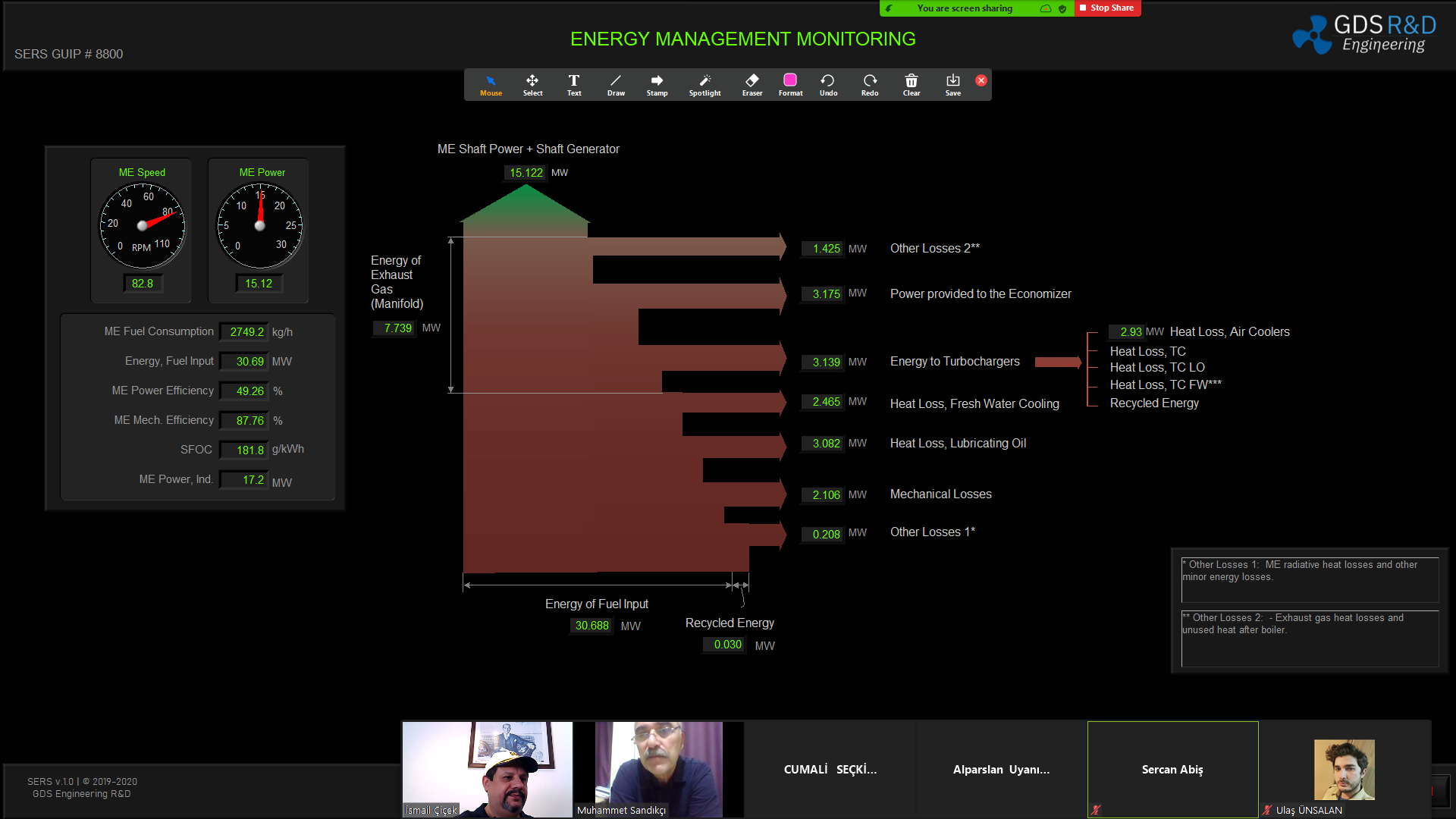 Noise travels much more in water, covering greater distances than it would do on land while travelling through air. Underwater sound has both pressure and particle motion components and hearing can be defined as the relative contribution of each of these sound components to auditory detection (Popper AN, 2011). Sounds radiated from ships are among the underwater noise sources. Among shipborne Underwater Radiated Noise (URN) sources are the following:
● Propeller’s rotational turn and the blades hitting to water flow lines
● Propeller’s cavitation
● Ship hull structure’s interaction water (fluid-structure interaction)
● Mechanical noises from onboard machinery

At GDS Engineering R&D, Inc., we provide engineering and research services for investigating the ship underwater noise emittance and limitations.

We have established a group of engineers and academicians, called “GDS Team”, to conduct for doing an initial research on the subject. Academic staff is selected from Istanbul Technical University (ITU) Marine Equipment Test Center (METC), which is a directorate established under the ITU Rectorate. Also, GDS Engineering R&D is established in the university research park with the permission of ITU Rectorate by laws. Consisting of both academic and sectoral subject matter experts, the GDS Team hereby submits this research and evaluation paper.

Our study reflects that there has been an increase in academic and scientific studies, in the last decade, with regards to shipborne noises and their effect on marine life. Our research indicates that the International Maritime Organization (IMO) Marine Environment Protection Committee has also held a subject meeting in 2019 and published a report (IMO MEPC 74/INF.28, 2019). The IMO report indicates that there is no requirement or a strong guidance document yet published with regard to Underwater Radiated Noise (URN):

“The report provides an overview of URN issues but is not intended as a complete guide to this very complex subject.” (IMO MEPC 74/INF.28, 2019).

Similar studies show that there are no standard thresholds established and currently required as design criteria for commercial ships.

This research study focuses on the following main areas:

Animals will only respond directly to sounds they can detect. Marine animals depend on sound to live, making and listening to it in various ways to perform various life functions (US Bureau of Ocean Energy Management, 2014). The effect of underwater noise pollution is more painful than anything else for the animals. Most animals are alarmed by the alien sounds. The deaths can occur due to hemorrhages, changed diving pattern, migration to newer places, and damage to internal organs and an overall panic response to the foreign sounds. There is also a disruption in normal communication between marine animals as a result of underwater noise pollution. This means animals prone to noise pollution are unable to call their mates, look for food or even make a cry for help under such circumstances (Singla, 2020).

Figure 1 shows the frequency ranges produced by various marine mammal groups (US Bureau of Ocean Energy Management, 2014). The relative noise frequency bands created by various human noise sources are indicated. It also shows that all human made noises that affect various undersea life with the respective frequency ranges. Due to this fact shown with this figure along with similar studies and reports discusses in the upcoming sections, there is more attention to do research on marine mammals and industrial noises to understand how these noises affect the mammal groups.

Behavioral responses of marine mammals to noise are highly variable and dependent on a suite of internal and external factors. Internal factors include (Ocean Noise and Marine Mammals, 2003)

Many marine animals like the fish (rockfish, herring, san eel, cod, blue whiting etc.) show signs of extensive damage to their ears upon exposure to seismic air guns even up to several kilometers. Exposure to noise during embryonic stage increases sensitivity of fish to noise impact, increasing the mortality rates at time of birth and development of genetic anomalies. The migration to new areas not only affects the marine diversity balance but indirectly affects humans too. A decreased catch in many fish species like herring, cod and blue whiting especially in areas susceptible to noise pollution from ships has been noticed (Singla, 2020).

Sensitivity of various marine animals to ocean noise pollution is varying. While cetaceans like whales and dolphins may show a greater resistance, soft shelled species like mollusks, prawns, fish, etc. are much more sensitive. However, it is important to note that as many as 24 cetacean species have shown negative effects of noise pollution in the ocean. In all about 55 marine species have been noted to have suffered due to exposure to sound of varying frequencies. These include sperm whale, grey whale, mink whale, pygmy sperm whale, killer whale, sea bass, pink snapper, goldfish, cod, haddock, bluefin tuna, squid, lobster, brown shrimp etc. (Singla, 2020).

Mass stranding of giant squids in coastal areas of Spain between 2001 and 2003 showed how grave the implications of noise pollution in marine life can be. These beachings can occur merely hours after such an exercise.  Dislocation or movement of marine animals to newer locations is also one of the many ocean noise pollution effects. While this may seem like a survival mechanism, studies conducted for a follow up on these animals isn’t that promising as most animals fail to acclimatize in the new environment, not to mention loss of diversity in many regions (Singla, 2020).

Sound is an extremely efficient way to propagate energy through the ocean, and marine organisms have evolved to exploit this property. Fish utilize sound for navigation and selection of habitat, mating, and communication (Bass & McKibben, 2003) (Simmonds & MacLennan, 2008).

There is a reason why the ocean is called the ‘silent world’. In this world, where sounds of their own exist, there is no room or rather any need for foreign sounds to breach the harmony of their world. Studies are being conducted to understand the effects of noise pollution on marine life in a much better way. But until a safe mechanism can be thought of which will ensure that marine animals do not continue to commit as much as mass suicide due to human errors, safety through prevention is out best shot at keeping the sanctity of this ‘silent world’ intact (Singla, 2020).