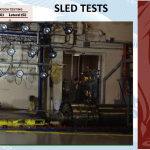 Acceleration, as addressed in MIL-STD-810G Method 513.6 (Department of Defense, 2009), is a load factor (inertial load or “g” load) that is applied slowly enough and held steady for a period of time such that the materiel has sufficient time to fully distribute the resulting internal loads to all critical joints and components.

The common methods used to expose equipment to a sustained acceleration load are centrifuge and track/rocket-powered-sled testing.

However, both methods impose limitations on AE equipment testing. For example, the costs required and the scheduling, planning, and coordination phases associated with the use of these types of test
facilities are often prohibitive. In some cases, centrifuges and track/rocket sleds may limit the orientations at which the test article can be mounted for testing. To maintain validity, all AE devices are tested under the same mounting configuration as intended for operational use. Finally, due to the often expensive and delicate nature of medical devices, insufficient inventories often prevent the use of these tests due to their somewhat destructive nature.

Because of the difficulties associated with physical dynamic testing, the ATB team initially turned to Finite Element Analysis (FEA) as the method of choice for meeting acceleration test requirements.

Recent technological advances in microcomputing and higher resolution graphics capabilities allowed complex systems to be modeled and simulated for both static and dynamic tests.

The FEA techniques were already used by others for various aircraft structures and devices. For example, Foster and Sarwade (2005) performed an FEA of a structure that attached medical devices to a litter. This structure was later approved as STF. Continuing on the same theme, Lawrence, Fasanella, Tabiei, Brinkley, and Shemwell (2008) studied a crash test dummy model for NASA’s Orion
crew module landings using FEA. Viisoreanu, Rutman, and Cassatt (1999) reported their findings for the analysis of the aircraft cargo net barrier using FEA. Furthermore, Motevalli and Noureddine (1998)
used an FEA model of a fuselage section to simulate the aircraft cabin environment in air turbulence. These and similar studies demonstrated the successful use of the FEA method to verify requirements
by analysis for an acceleration test.

Given the costs associated with dynamic testing, the ATB originally envisioned using the FEA method to alleviate budget and inventory concerns. To test this theory, the ATB employed FEA for testing various AE structures to meet the acceleration requirements and found some aspects of this method to be cost- and time-prohibitive.

Lessons learned from these studies are provided in the case-studies section. The various types of analysis and test methods raise questions as to what the correct decision process is for selecting the most appropriate method for STF testing of AE equipment.

The authors of this article describe the process developed and employed by the ATB for the acceleration testing of AE equipment since June 2008.

The ATB’s process has proven to be well suited for identifying the most appropriate test method—one that not only represents the most appropriate and effective test method, but also minimizes the use of available resources. This process includes testing both structurally simple and complex equipment and successfully introducing the use of the Equivalent Load Testing (ELT) method, which permits
the use of alternative testing approaches, such as pull testing and tensile testing.